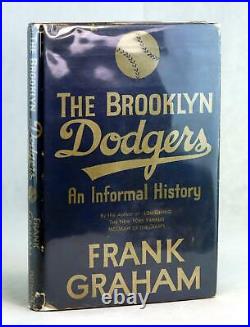 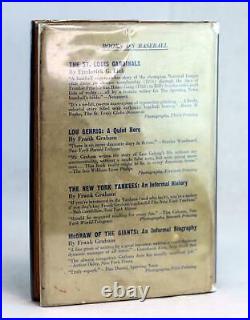 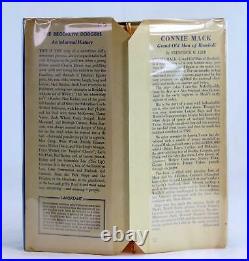 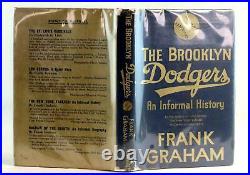 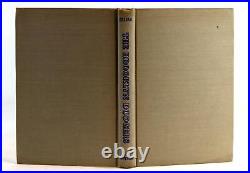 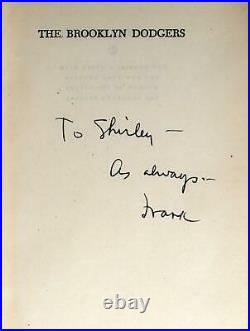 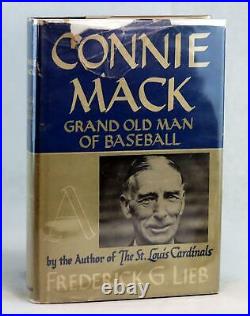 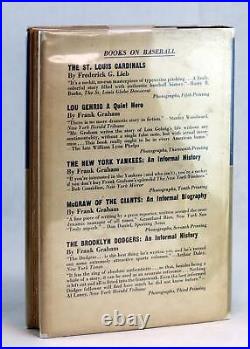 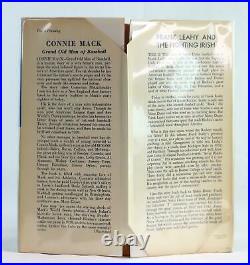 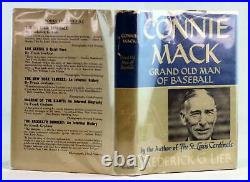 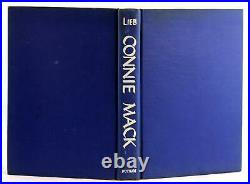 G P Putnam's and Sons, New York. Brooklyn Dodgers is signed on the half-title page by Frank Graham. Connie Mack Philadelphia A's is a Fifth Printing. DJ has shelf-wear present to the DJ extremities (some DJs are chipped at the spine ends and the edges). Bound in cloth boards with titles present to the spine and front board.

Putnam's Sons, a New York-based publisher, with an idea for a Gehrig biography. The result, "A Quiet Hero, " was one of their major successes for the next two decades, went to more than 20 printings, and was practically required reading for schoolboys. Thus began a wonderful series of team histories, which Putnam would issue over the next dozen years, when they did their 16th and last, the Baltimore Orioles. (One, called "Connie Mack: Grand Old Man of Baseball, " was of course, a history of the Athletics, but it was the only one that did not bear the team name).

Between Graham (Yankees, Dodgers, and Giants), and Fred Lieb (Phillies, Tigers, Red Sox, Pirates, Athletics, Cardinals and Orioles), ten of the 16 were accounted for. Warren Brown did the Cubs and White Sox, Lee Allen the Reds, Shirley Povich the Senators, Franklin "Whitey" Lewis the Indians, and Harold Kaese the Braves. All but Lewis are in the writer's wing of the Baseball Hall of Fame. Povich was the last of the group to die, passing away in 1998, after writing a column about Mark McGwire and David Wells for the Washington Post.

For the others, part of the joy of these books was that the authors went back themselves to the early part of the century, or at least knew people connected with the team's early days. In fact, that is what makes these histories so important - the writers had access to people, either first or second hand, who lived through the early decades of the franchise's history. Lieb was born in 1888 and began covering baseball in 1910. Graham was born in 1893 and could talk to Clark Griffith about managing the original Highlanders.

Brown was born in 1895, Povich in 1905. Brown had access to Cap Anson. Povich was pals with Walter Johnson. Their writing bears much credibility today as an important, if somewhat mild view of each team's development, and can never be dismissed simply because they came from a more benign era of writing. The profiles offered of star players, managers and owners were generally based on first hand familiarity.

OUR MISSION STATEMENT: Our goal is to provide the best books for the lowest prices. Thank you for visiting this listing and we hope to see you again soon!

Book formats and corresponding sizes. Approximate cover size (width × height). ALL ITEMS ARE DESCRIBED TO THE BEST OF MY ABILITY! We do not mark merchandise values below value or mark items as "gifts" as US and International government regulations prohibit such behavior.

(This is a felony in the United States). Create your brand with Auctiva's.

Attention Sellers - Get Templates Image Hosting, Scheduling at Auctiva. This item is in the category "Books & Magazines\Antiquarian & Collectible".

The seller is "lastexitbooks" and is located in this country: US. This item can be shipped worldwide.