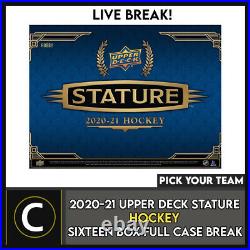 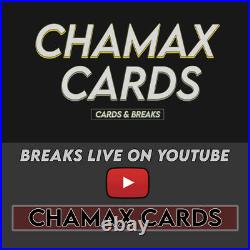 This break will include all 31 NHL teams. YOU'RE NOT PURCHASING A BOX OF CARDS OR INDIVIDUAL CARDS. If you miss the live break you can go to our YouTube channel, as all breaks will be saved there under the break #. All cards will be given to the team who's logo is on the card. Cards from previous teams such as the Hartford Whalers will go to the Carolina Hurricanes etc.

Vintage Winnipeg Jets will remain the Jets. If the card is featuring player(s) in an NHL All-Star game the card will go to the team the player represented that All-Star game. If a player on a card is featured in the Olympics, or Junior team he will go to the team he currently plays for or if retired the team he played the most NHL games for. A HIT card is a value card that is pulled in a break.

We classify a hit card for this product as ALL cards except standard veteran base cards. S & Canada via Post. All cards are sent out every Monday. 2020-21 UPPER DECK STATURE HOCKEY 16 HOBBY BOXES (FULL CASE). Configuration: 16 boxes per case.

Each 16-box master case contains two 8-box inner cases. 2020-21 Stature is loaded with autographs - all of which are hard-signed! The 200-card Base Set consists of 100 star veterans and retired legends, and 100 rookies. Each base rookie card is numbered to 399.

Collect up to nine parallels of the Base Set, including five autograph parallels, highlighted by the 1-of-1 Black Auto parallel. Seven of the nine parallels are numbered to 99 or less! Also collect the Portrait Variant of the complete Base Set, and up to five parallel sets.

Century Momentous: Consists of some of the greatest players in the history of the game. The non-autographed versions will highlight a crowning achievement in the career of each player - from a notable statistical record to hoisting the Stanley Cup. Gravitas: Features the top veteran players in the game today. Like the Base Set, you can collect up to nine parallels of each, including five autograph parallels, as well as a stunning Patch Auto Variation set. Seven of the nine parallels are numbered to 75 or less!